The Importance of Seeing Ability

One of my favorite people that I’ve ever worked with was this fourth grade boy. When I first met him, I thought he could not speak. He was verbally unresponsive to me and appeared unable to pickup on social cues. I started to interview his mother who said, “ask him.” He did answer but in monotone. He also appeared very uninterested in our visit. It seemed laborious and quite frankly uninteresting to him to move. He also didn’t enjoy doing any strengthening exercises with me such as motor (muscle) coordination.

It wasn’t until I started listening intently to his world that I realized he was very interested in Japanese superhero cartoons. It was his ABILITY and passion and oh boy did he fill me in on this superhero world of his! I had never heard of these Japanese superhero cartoons, so to say I was hooked on his words and world is an understatement. After further discussion with this boy, I also realized he was interested in the whole process of movie making.

I wanted to incorporate his two big passions into my work with him… All I needed was to film him doing moves from Japanese superhero cartoons! Before I knew it, he was moving and verbally communicating in the most beautiful way. Now, he was the creator, director and teacher; Voila! It worked. In front of the camera, he became a boy on fire with passion for his world and his interests! He moved quickly and intently; even his muscle tone seemed to change and he spoke assertively and with lots of detail.

We spent the next four months of therapy planning, creating, acting out and filming exercise films that we liked to call “Superhero flicks”. Three years later, his parents invited me to a local theatre production to see their son perform. It was delightful! Remembering this time reminds me to continue to look until I see the true passion and ABILITY in every child and to take a step further to honor those passions and ABILITIES. 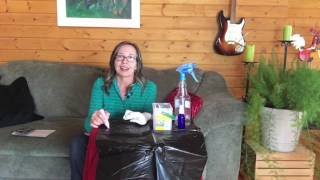 Sensory Bag: what to put in one

A Book About Kids With Disabilities